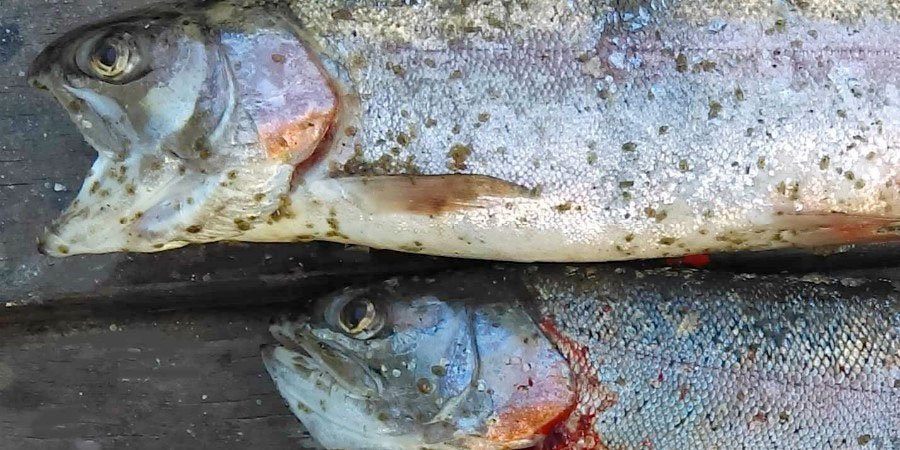 Dennis Willis has just completed a written report on our ongoing battle with argulus in our lake. As you know argulus is not kind to trout and Dennis, Alan and Graham have worked very hard over the last three years to remove thousands of eggs from the lake. The results have been very noticeable.

Please take time to read Dennis’s report and the EA guidelines. If you want to share his report with anyone outside the Club please check with him as the report is his copyright. 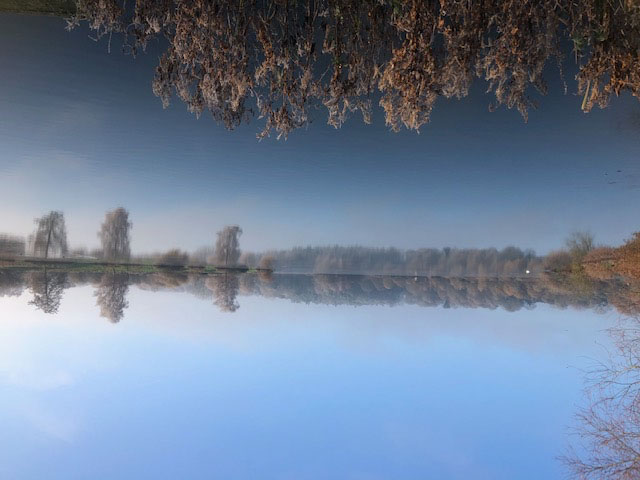 A little good news for a change!

We have looked at the lake this morning and, whilst there is still an excess of about 3-4 inches of water in the lake, it will fishable and open to anglers on Thursday morning onwards (said he – hoping like hell that we do not have too much rain in the meantime!); but under the same Covid restrictions and advice as before i.e. it is up to you, and if you do go, stay safe and socially distance!

The water is a little dirty still, but we did see one or two fish moving around this morning.

However, given the bank erosion and general mess around the West bank and Haul Road area, we have to restrict fishing to the South, East and North banks only; and please access the North bank via the South and East banks, leaving the West bank closed.

Moreover, there is still a lot of water and ice around; so, please take great care and do not fish from any of the swims that are still covered with water and/or ice – it is very soggy and slippy out there.

Finally, for those intrepid few who can take vehicles lakeside due to mobility issues, you are strongly advised not to do so if you can avoid it. However, if you do take a vehicle around the lake, only use the South, East and North banks; but no further than the gravels, and be extra careful turning around.

Enough of the “don’ts” – do enjoy yourself down at the lake if you can! 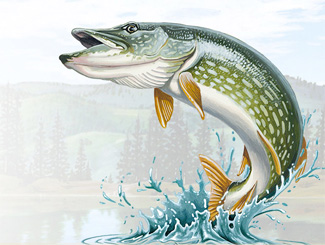 Two events of the above come to mind.

The first occurred back in the mists of time when I was a medical student. In those far off days , my fellow student David ( who now resides in tranquil relatively covid free safety in Queensland and who has fished many times at swanton morley over the ensuing years and who once stripped gallantly to the waist to attempt to retrieve a rod gaily thrown into the lake by a lady member when she lost grip on her forward cast !) and I used to travel to Hemingford Grey on the R Ouse for our fishing. Our means of transport was my 1964 BSA 500 Twin motorbike . I did have a small box on the back to carry stuff  , but the bulk of our gear had to be hauled in a large rucksack on poor David’s shoulders . It was 60+ miles from Paddington to Hemingford and it was winter and very cold ( remember cold winters?). but hey , we were young . When we arrived , I had to support him for a few minutes while his knees recovered sensation! I remember him telling me he could feel his feet and his upper thighs , but nothing in between!

We stayed in a small wooden shack on the river bank which was idyllic in the summer for the chub fishing , but not so great in the winter when the bottled gas was so cold that a 1/8inch flame meant waiting 30 mins to boil the water for coffee!

Anyway we were there to fish , so fish we did . On the second day , David hooked a small and lively jack on a plug from the old weir pool and unfortunately during the unhooking process , yes you guessed it , it kicked and rolled and sank the rear treble right into his right middle finger , past the barb! Tricks on how to remove hooks with loops of nylon were unknown to us then ( and anyway , those are really only for small hooks , not socking great galvanised trebles!), so what to do?

The only thing to do was go to the local Casualty Dept (A&E in modern speak). So , onto the motorbike and off to Huntingdon General Hospital. We went via St Ives , and David gaily signalled all the turns from the pillion seat with his pike plug dangling from his finger.(Incidentally I once almost collided with Joe Bugner in one of the small supermarkets in St Ives.He was HUGE!! And I mean HUGE!!)

A small amount of local anaesthetic and a small nick with a scalpel and the offending plug was removed , returned to its owner and taken back to continue fishing duties.

The other plug/pike related episode concerned myself. Some of you may remember that the late Peter Nisbet , long time NFC member and past committee member , and I , used to fish together for years.

Peter was a resident of Hoveton and had obtained permission to fish the Little Broad , which along with the Great Broad are privately owned by the Blofeld family. The original permission had been granted by Sir John Blofeld’s father but the judge was happy for it to continue. (Henry Blofeld is of course of the same stable.)

To reach the broad itself in those days one had to row across The Pound , a small backwater of the main broad . It was in the time before some serious mud pumping of those waters was done , so at certain tide states you found yourself trying to propel the boat ( which were classical double ender shooting punts)over liquid mud( the expression is “fleet”). So I soon discovered why Pete was so keen to have me along! Yes there was a time when I was young and strong!

I suppose we must have arrived at about 8am , and therefore fishing by 9am, and quite soon after ,I was into my first pike on a plugbait.

A reasonable fish I remember , low double I think, and yes it was my turn to be impaled!

As I reached for my pike gag and long artery forceps ( can’t remember which hospital I nicked those from) , the blighter rolled and sank one of the tines of the tail treble , large and galvanised once again , right into the ball of my right thumb ( my dominant hand of course). Wicked barbs on those things , so it wasn’t coming out the same way that it went in!

Now we hadn’t been there very long , and there clearly was promise of more pike to be had , so I was blowed if I was going to waste the day trudging off to A&E , not to mention the difficulty rowing with a large plug in the thumb! So , again , what to do?

Then I remembered that in my tackle box I had a pair of wire cutters. They were there to cut alasticum wire to make up new traces in situ in case of loss. I hadn’t worked out that ordinary scissors would have done just as well at that time. Pete was sitting in the other end of the boat suggesting we went to A&E ( and offering to row!!), but I reckoned what I needed to do was just push the hook round and back out of the skin so I could cut the barb off and then withdraw the barbless section. So that’s what I did , and I still have and use that plug , now with a double rather than a treble hook on the tail. A few minutes of firm pressure stopped any bleeding although there was some deep bruising of course.

Pete’s face at that point was noticeably pale ! I remember that so clearly!  But we went on to catch several further pike that day , which we very very carefully dehooked .

And if anyone thinks I’m telling tall tales , I’ll happily show them the two point scars on my thumb a centimetre apart still there after 30 years!

Another ‘fishy’ tail for you all.

I was standing on my platform, looking hopefully out from the second stage up from the South East corner, waiting for a fish…any fish… to take my dry fly when a young chap, a rarity by any measure, came up and pointed out there was an orange streak moving slowly through the water about 5 metres out.

It looked like a fly line, and putting two and two together, we deduced that it was a line lost by a senior member of the club (that narrows it down I’m sure) who was fishing at the outflow. He was broken by a fish earlier in the morning and his line had snapped at the start of the backing. Moving at the speed of greased indifference I stumbled gracefully into action and cast my dry fly over the orange line hoping to snag it. I’m sure at this point you have worked out why I failed. Yep. Dry flies don’t sink. Doh. So to effect a quick(ish) rescue I hooked my dry fly though the eye of a gold head black and green lure and cast over the fly line which was just under the surface. My first cast sank the flies beautifully into the jaws of a waiting trout, which held on running around the end of the rogue line and eventually into my net.

A second cast at the rogue line saw a neat pick up and a gentle retrieve brought part of the line into my waiting hands. On completion of the rescue a second trout (over summer fish) was dispatched.

I coiled the line and returned to the grateful owner.

I now have three dilemmas about breaking club rules.

I throw myself on the mercy of this court.

From an anonymous Treasurer 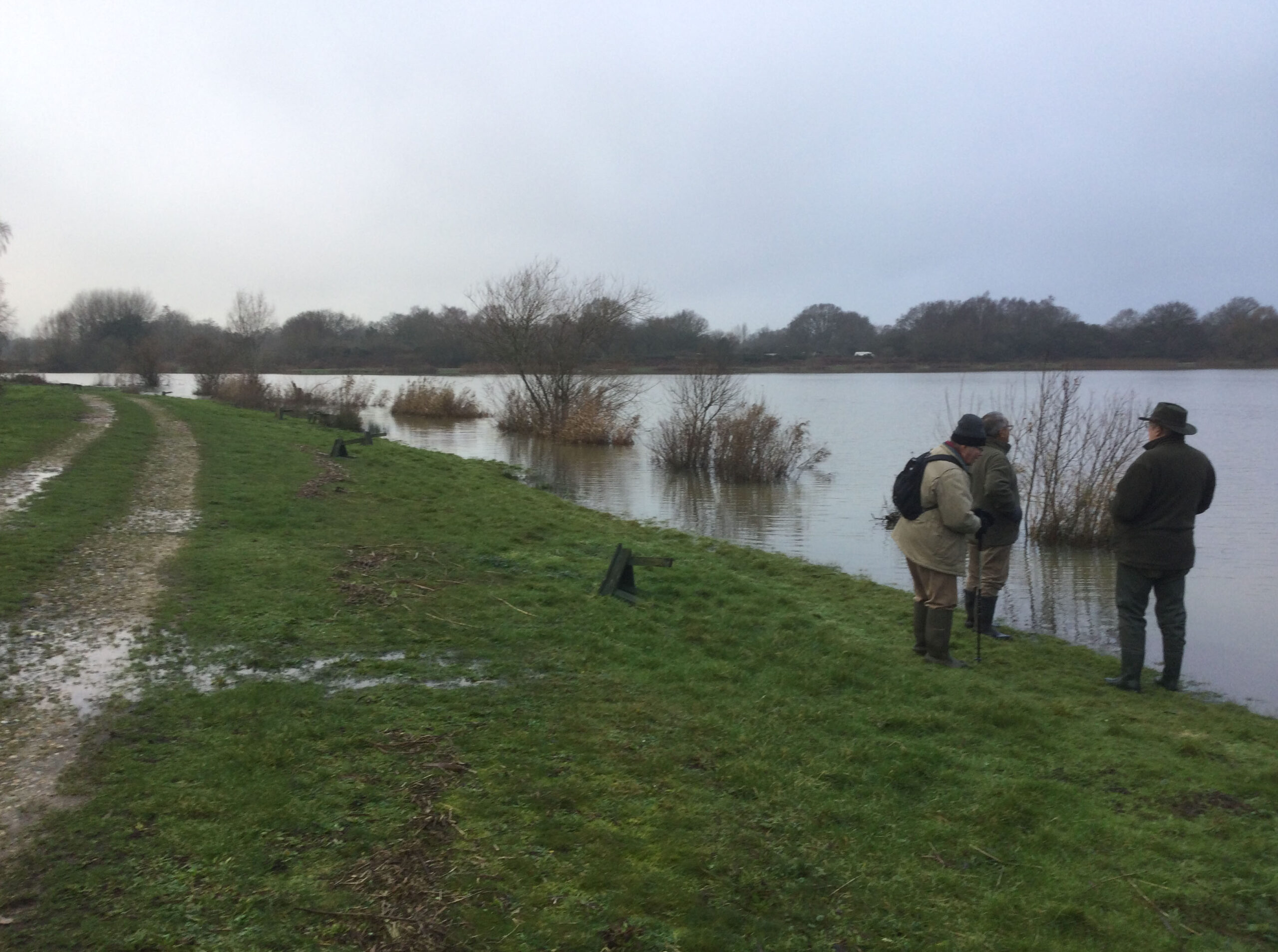 Not my caption! VK

Lake Opens on the 28th Jan

ANOTHER FISHY TAIL – something to make you smile.