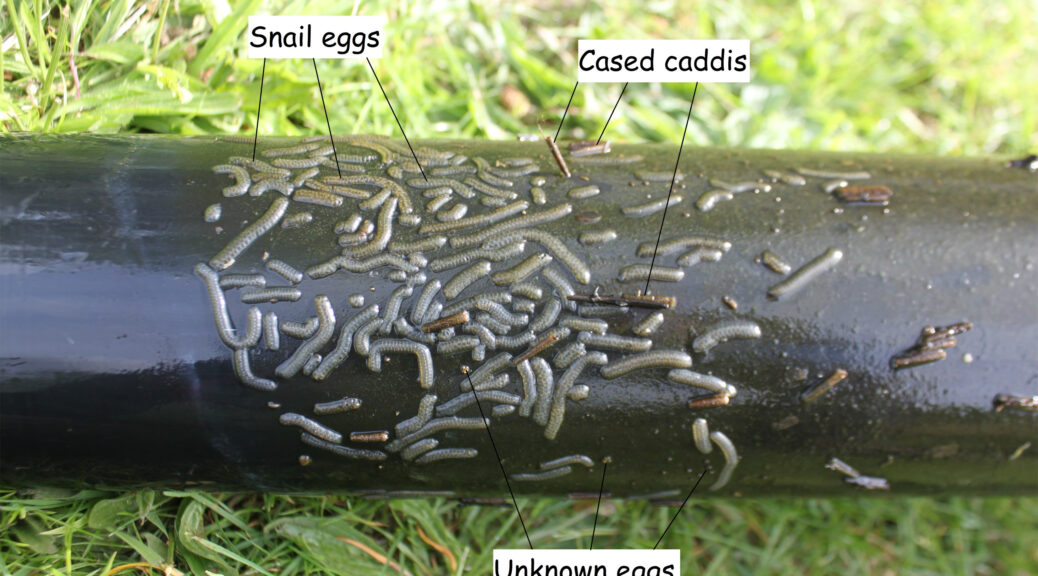 Nine pipes for egg collection were put over stakes in the lake on 2nd April. Six pipes were added on 5th April and a further three added on 3rd May. This last four were put in at West side of lake by the Haul Road section as experiment. Part of this section of the lake has changed significantly since the collapse of part of the road into the lake during floods. If they produce few eggs they will be removed.

The lake did not clear ALL winter with clarity varying between 60 and 90 cms. The water began to clear during the first week of May and clarity was observed at 200cms by 7th May. The lake water effectively cleared in less than a week and daphnia were observed in the water column.

Eight of the pipes were checked on 24th while the rest the following day.

This year the argulus eggs are being removed by a scalpel blade (as are leeches) but other eggs and invertebrates are left on the pipe to develop and maybe hatch. Concern is that debris and algae build-up may prevent the argulus laying eggs on the pipes. Whilst the count is somewhat lower on 24/25th a lower count has been observed previously at the end of May. Two additional pipes were bolted on to pipe nos. 6 and 14 on the 25th to possibly indicate if the argulus prefer (or not) to lay on a clean pipe.

Wow, what a fish!

Tagged fish – congratulations to Bill B for catching this fish.